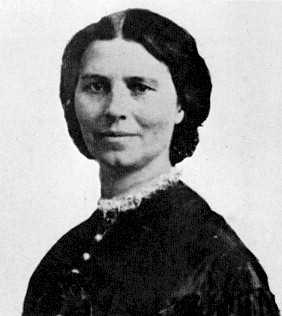 A woman who shaped disaster response in America. Read more about her service and how you can apply it to your own life.

Who is Clara Barton

Born December 25, 1821, in North Oxford, Massachusetts, Clara Barton was the youngest of 5 children and from a young age, she cared for others who were suffering. At the age of 11, the shy Barton was a nurse for her brother David after he fell from the roof. She administered his medicine and applied and removed leeches when the doctor suggested it might help to “bleed” the patient. Clara stayed by his side for two years but left when the famous Fowler brothers visited Oxford.

The Fowler brothers were phrenologists, “scientists” who studied the bumps on a person’s head to determine their future. (What a time to be alive.) After studying her, they proclaimed a career in teaching would cure her of her shyness. In 1839, at the age of 17, Barton became a teacher in a one-room schoolhouse in North Oxford, Massachusetts.

She was an excellent teacher and after 12 years of teaching in the area, she decided to further her own education. This required her to move to New Jersey, which had no free public schools, unlike Massachusetts.

With the help of the local school committee, Barton decided to open her own school in Bordentown. She was disappointed when only 6 students appeared on the first day of classes, but word soon spread of Barton’s teaching abilities, and by the end of the school year she had over 200 students.

After a few years of opening her own school, Barton resigned when she wasn’t chosen as principal of the school she started. Barton was upset as a man was picked at double her salary. A year later, in 1854, Clara moved to Washington D.C. and worked as a clerk at the U.S. Patent Office.

Clara Barton and the Civil War

In 1861, the Civil War begins, and Barton gets in involved when Union soldiers are mobbed in Baltimore, Maryland by supporters of the Confederacy. The injured were taken to the new U.S. Capitol building nearby Washington. Barton hurried from the Patent Office to the makeshift hospital to help the injured.

Compelled to make a difference, Barton jumped into action, gathering medicine, food, clothing, and other supplies to distribute to the soldiers. She convinced friends from Massachusetts, New York, and New Jersey to send needed supplies to her in Washington. Supplies came piling into the capital city for Clara to carry to “her boys.”

This was the start for Barton, a woman who would save many lives during the Civil War. The years of caring for her brother came in handy during one of the most gruesome times in American History.

While tending to soldiers Barton had a few close calls. At the battle of Antietam, while cradling the head of a wounded soldier, a bullet passed through the sleeve of her dress and into her patient. She wrote,

“A ball has passed between my body and the right arm which supported him, cutting through his chest from shoulder to shoulder. There was no more to be done for him and I left him to his rest,” Barton continued, “I have never mended that hole in my sleeve.”

Another close call happened at the Battle of Antietam. After working for 24 hours straight, Barton returned to Washington and collapsed with a likely case of typhoid fever. It took her over a month to regain her strength and return to the battle. Barton’s actions at Antietam earned her the nickname “Angel of the Battlefield.”

Another time, Barton refused to leave wounded Union soldiers behind even though Confederate soldiers were nearby.  She wrote

“I knew I should never leave a wounded man there if I were taken prisoner forty times,”

After two days of sleepless work, providing men with food, water, and care, she returned to her tent, only to discover it had become flooded in the storms. She later recalled during this time, she managed to catch a catnap by leaning against a box in the water, before returning to load the wounded men onto the train. After Barton finished loading the last wounded soldiers onto the train, she hopped in. As the train chugged away, Confederates galloped up to the train station to burn it down.”

The Final Moments of the Civil War

In 1865, Barton had to take a break from the battlefield to attend to family matters. Her older brother Stephen had been captured by the Union Army and imprisoned. Yes, you did read that correctly. The same army that Barton was caring for, imprisoned her brother because they thought he was a confederate agent.

During his imprisonment, he became frail and sick. Barton successfully secured Stephen’s freedom and then tried to nurse him back to health. But Stephen worsened, and she resigned from her hospital position to continue to nurse him in Washington.

He died in March, followed two weeks later by her beloved nephew. For Barton, these personal losses overshadowed the glorious news of the war’s end in April 1865. President Lincoln’s assassination days after the war ended only made it worse.

Barton pushed forward and returned to the battlefield. Instead, this time her mission was to find missing soldiers. Barton won the approval of President Abraham Lincoln just before his death to address the problem of large numbers of missing soldiers.

By the authority of the President, she established The Office of Correspondence with Friends of the Missing Men of the United States Army on March 11. Recognition by the War Department followed two months later. She started to direct a four-year search for missing men as the Civil War ended on April 9, 1865.

Clara Barton After the Civil War

It is claimed that Barton answered 63,000 letters and located 22,000 deceased soldiers during the 4 years of operating The Office of Correspondence with Friends of the Missing Men of the United States Army. She closed the office in 1869 and went on a trip to Europe because her doctor advised her to.

She would go on to lead the Red Cross and bring awareness to the organization throughout the United States. Finally, on May 21, 1881, the American Association of the Red Cross was formed.

Clara Barton and The Red Cross

Barton led the Red Cross in providing relief during the Mississippi River Floods in 1882, and the Ohio River Floods of 1884. In 1892 She oversaw the first international operation carried out by the American Red Cross.

This operation fed 7,000 people during the Russian Famine. She and the Red Cross were there in 1898 on the U.S.S. Maine when it exploded, killing 266 crew members. Yet again, she responded in a time of need.

In that year she would meet with the famous Theodore Roosevelt and provide supplies for wounded Rough Riders. The Spanish American War was the first time the Red Cross helped the U.S. military.

In 1900, she would direct her last major field relief helping disturb supplies during the Galveston Texas Hurricane and Tidal Wave. In 1904 at the age of 83, Barton resigned from her position as President of the American National Red Cross because of criticism of her management style, ability, and age. However, this didn’t stop Barton from helping people.

A year later, in 1905, Barton established the National First Aid Association of America and served as honorary president for 5 years. The organization emphasized basic first aid instruction, and emergency preparedness, and developed first aid kits. Ambulance brigades were formed in conjunction with police and fire departments.

So next time you call 911 you can thank Clara Barton for setting the groundwork for the system we enjoy today.

On April 12, 1912, Clara Barton died at her home in Glen Echo, Maryland, at the age of 90. This article only touches the surface of what Clara Barton accomplished. In addition to what you just read, she was also a published author and women’s rights activist. She will always be remembered as the “Angel of the Battlefield” and for bringing the Red Cross to the United States.

However, she didn’t just bring the Red Cross to the United States, she transformed the organization. As David Price, Executive Director of the Clara Barton Missing Soldiers Office Museum in Washington, D.C. said,

“The only reason we have a Red Cross today that responds to natural disasters and emergencies is because of this lady and her determination to help her fellow man.”

How Can Knowing About the Life of Clara Barton Help Me?

If you have read this far, thank you I really appreciate it. This article isn’t just a bio or remembrance post about a selfless woman. I write this article in hopes you get a new perspective, one of service.

Barton started serving people at the age of 11 when she was her brother's nurse. She helped people from different backgrounds and countries, and even helped both Union and Confederate soldiers during the war. She didn’t have formal training, but she didn’t let that stop her. We should aspire to be like Clara Barton. We don’t have to treat wounded soldiers, but we can do small acts of service when the time comes.

We can shovel our neighbor's driveway during the winter. We can load groceries in a car for an elderly couple. We can pick up an empty beer can on the beach. Regardless of what it is, we should remember Clara Barton and make serving others a part of our lives.