Poster in 1886, Liberty Enlightening the World France's gift to America. Pictured by: Dr. Jean Fortunet, Changes were not made and the license under this photo is the GNU Free Documentation License

The Statue of Liberty was supposed to be in Egypt

The story of how the Statue of Liberty came to be.

Introduction to the Statue of Liberty

The origins of the Statue of Liberty

The French sculptor Frédéric Auguste Bartholdi visited Egypt in 1855 and admired the colossal
statues on the facade of the temple at Abu Simbel. He wanted to work on a monumental scale, and in 1867, Bartholdi proposed that the Egyptian government build a giant statue and light beacon in the form of a woman holding a torch at the entrance of the Suez Canal. Entitled “Egypt (or Progress) Carrying the Light to Asia,” it was to symbolize industrial and social progress in Egypt. 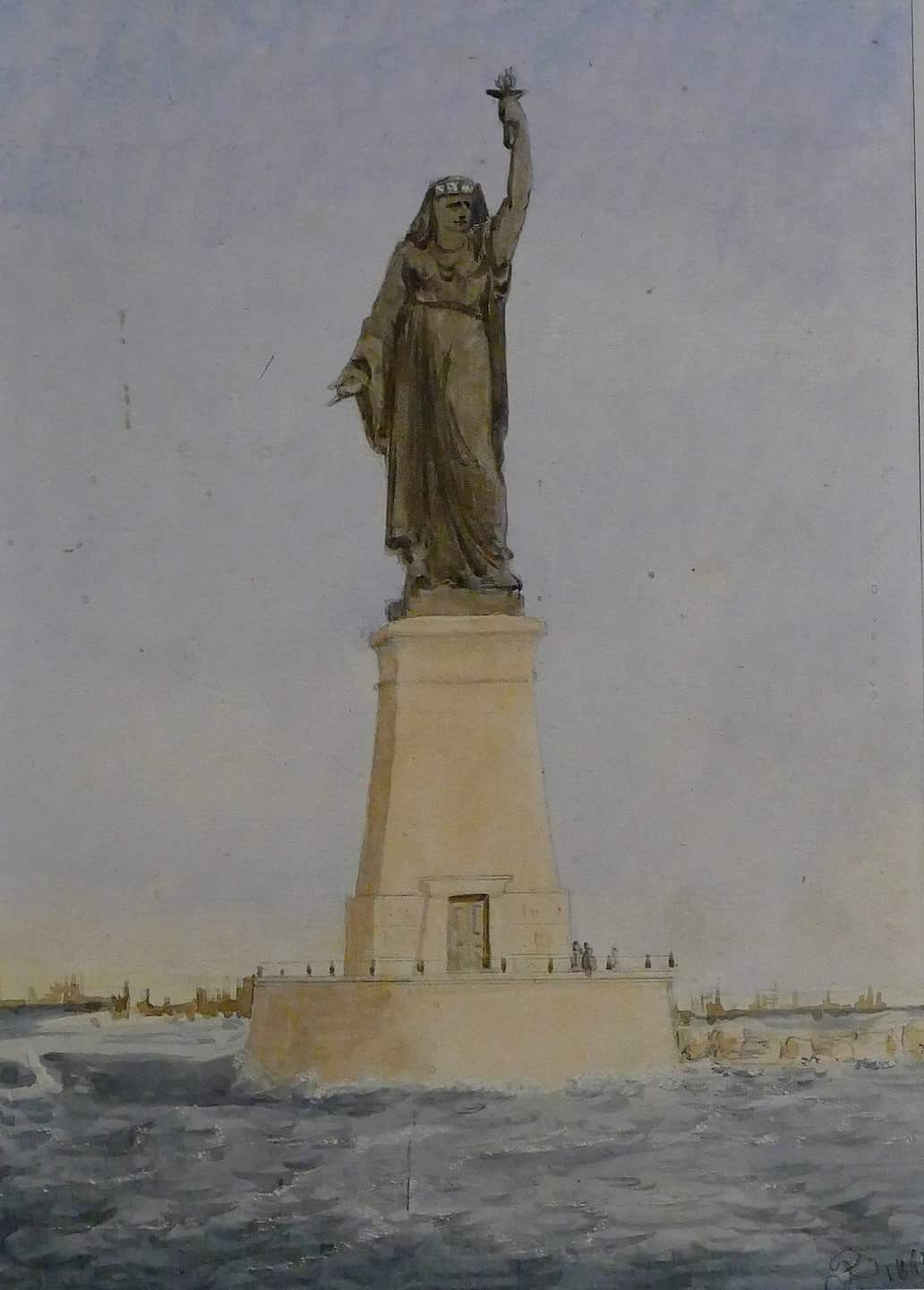 Why did Egypt reject the statue?

There are a few different reasons why Egypt turned down the offer but the main one seems to be that the statue was too costly to build. Khedive Ismail, The Egyptian ruler at the time, had driven Egypt into debt. To make matters worse, the Egyptians had just built a new Canal and the idea of another big project just didn’t make sense.

How the United States ended up with the statue

Returning to France empty-handed, Bartholdi had to come up with a plan. He decided to
develop a series of patriotic sculptures. The purpose of this transformation was simple, to convince the Americans to take the statue and form a friendly relationship with France. At the time, America favored Germany as a European ally, in fact, German was the second language spoken in America. On top of that, in 1870 America sided with Prussia in the Franco-Prussia War. So, some thought that the statue would be the last Hail Mary in developing a friendship with the United States. He transformed the Egyptian colossus into a neoclassical Statue of Liberty. In the final sketches of the Statue of Liberty, the lady holds a tablet with the date of the Declaration of Independence in Roman numerals: July 4, 1776.

How the Statue of Liberty got to New York

Bartholdi always had his eyes set on New York for the statue. He visited Central Park, the
southern tip of Manhattan, and sailed around New York Harbor. On his trip around the harbor, he was captivated as he wrote to his mother:

“ [The waters] are covered with shipping as far as the eye can reach.”

On his second day in the city, Bartholdi found his spot, Bedloe’s Island. This tiny island
was home only to a military fort and not much else. From this Island, the statue would be visible from the harbor, the city, and probably most importantly, from every ship entering the New World.

The struggle to finance the building of the Statue of Liberty

Buckle in because here’s where things get interesting.

From the start, it was agreed that France would build the statue and pay for it, and America would build the pedestal and pay for it. The French were able to raise their 250,000 with help of Édouard René de Laboulaye, the man who had authored the idea of the Statue of Liberty. After the fall of Napoleon III, he became a French senator and reached out to regional governments, schools, the owners of copper mines, and the descendants of French soldiers that fought in the American Revolution to fund the project. By 1880, the French had collected 250,000 francs.

The Americans, however, had trouble holding up their end of the bargain. To help boost publicity, Bartholdi sent the Statue of Liberty's outstretched arm and torch to Philadelphia for its centennial celebration in 1876. Fundraisers across the country held boxing matches, plays, and auctions to bring in cash, but it didn’t gain much steam. By 1884, the American Committee for the Statue of Liberty ran out of money. Congress and the governor of New York at the time wouldn’t fund it either so unless something big happened, Lady Liberty would have no place to stand.

It was Joesph Pulitzer, a Hungarian immigrant who took matters into his own hands. On March 16, 1885, he asked readers of his newspaper the New York World to send in donations for the pedestal.

To incentivize donations and motivate people, Pulitzer printed the names of people who donated in the newspaper and usually included details that the donators had supposedly sent him about why they were donating or how they had come up with the money.

It is important to note that Bartholdi helped in fundraising efforts. Bartholdi displayed the head and shoulders in Paris, selling miniatures and charging admission to see the pieces.

The fundraising methods used by Bartholdi and Pulitzer would be known today as Crowdfunding— the funding of a project by raising small amounts of money from many people.

It was one of the first times where crowdfunding was used to raise money for a large project, however, this term would be coined much later in history.

The Statue of Liberty sent to the United States

Construction of the statue was completed in France in July 1884 with the help of Alexandre Gustave Eiffel, who would build the Eiffel Tower just a few years later. The ship arrived in New York Harbor on June 17, 1885. While awaiting construction of its pedestal, the statue remained in pieces on Bedloe’s Island. The pedestal was completed in April 1886 and finally, on October 28, 1886, President Grover Cleveland oversaw the dedication of the Statue of Liberty in front of thousands of spectators.

The importance of the Statue of Liberty

The Statue of Liberty has taken on a different meaning over time. While Lady Liberty honored
the Revolutionary War, it was actually the Civil War that motivated the gift. Édouard René de Laboulaye inspired the idea in 1865. However, to make the statue more about friendship, it was decided to make the statue about the revolutionary war to remind America that the Frenched helped them during the war against the Crown.

In 1903, a plaque placed on the pedestal would change the Statue of Liberty forever. On
the plaque reads a poem by Emma Lazarus:

Not like the brazen giant of Greek fame, With conquering limbs astride from land to
land, Here at our sea-washed, sunset gates shall stand A mighty woman with a torch, whose flame Is the imprisoned lightning, and her name Mother of Exiles. From her beacon-hand Glows world-wide welcome; her mild eyes command The air-bridged harbor that twin cities frame. "Keep, ancient lands, your storied pomp!" cries she With silent lips. "Give me your tired, your poor, Your huddled masses yearning to breathe free, The wretched refuse of your teeming shore. Send these, the homeless, tempest-tost to me, I lift my lamp beside the golden door!"

And with that poem, the Statue of Liberty became a beacon of hope for the 12 million people
who would enter the U.S. through nearby Ellis Island during the 20th century.

Next time you find yourself in the Big Apple, be sure to pay Lady Liberty a visit.

1. “Creating the Statue of Liberty.” National Parks Service, U.S. Department
of the Interior.