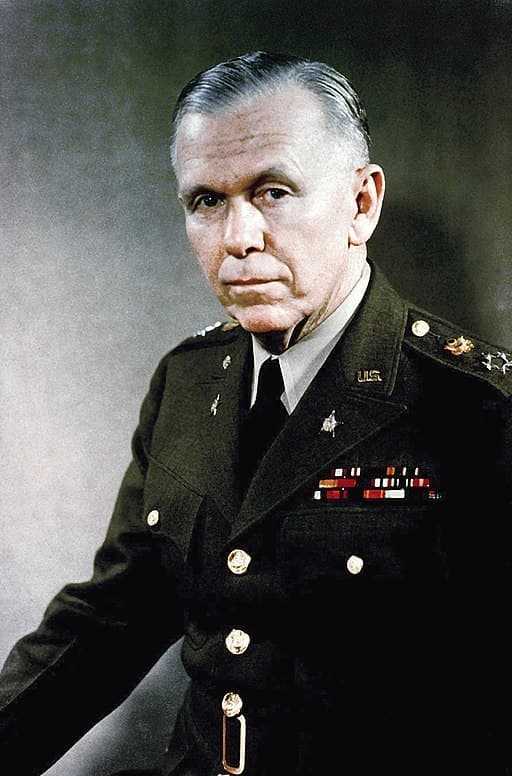 Who was George Marshall?

George Marshall was an American soldier, military leader, and statesman during some of the toughest times in American history. He was a soldier in World War I and supervised the U.S. Army during World War II. President Truman later described him as the "architect of victory" in World War II. During the Korean War, he sprung into leadership again acting as the Security of Defense.

You have probably heard of the “Marshall Plan” in school, also known as the European Recovery Program, which was a U.S. program providing aid to Western Europe following the
devastation of World War II. It was enacted in 1948 and provided more than $15 billion to help finance projects across the continent.

There was a legend during World War II that Marshall kept a “little black book” that had the names of junior officers he had encountered over the years who had impressed him. While it’s been argued that the physical black book itself didn’t exist, what is not argued is that Marshall did keep tabs on promising junior officers. Many of those, including Eisenhower, Bradley, Ridgeway, and others, went on to become successful commanders during the war.

Marshall’s opportunity to act decisively on the deadwood officer problem occurred when the Second Supplemental Appropriation Act of 1940 was passed. Included in its provisions was the elimination of the seniority-only criteria for promotions. Now having the legal backing to promote deserving junior officers, Marshall would clean house and reshuffle the military.

He established what was called the “plucking board” or “plucking committee.” Its task was to review the efficiency ratings of the older officers particularly colonels in their 60s and near retirement who could not withstand the harsh demands of combat command—and weed out the worst to make room for younger, more fit officers.

In his instructions to the review board, he told them to ignore past, peacetime records, as they were meaningless when it came to the demands of leadership in combat. “Critical times are upon us,” he warned. Only “today’s performance” mattered. In the first six months, the panel removed 195 captains, majors, lieutenant colonels, and colonels. Ultimately 500 colonels were forced into retirement. One who was not was Col. George Patton. Even though being 54 years old placed him in the at-risk for retirement category, Patton survived the chopping block of George Marshall.

On the day in 1939 that he became chief of staff, the U.S. Army was a small, tiny force of about 190,000 men— “not even a third-rate military power,” as he later wrote in an official Pentagon report—Just 6 years later, when he stepped down, the army numbered almost 8 million soldiers and had 40 divisions in Europe and another 21 in the Pacific. Love him or hate him, he got things done. Because of his ability to get things done, he achieved many things both formally and informally.

A few of George Marshall’s achievements:

—The first U.S. general to be awarded a fifth star and named General of the Army.

—The only person to serve as both Secretary of State and Secretary of Defense.
*Congress waived the provision in the law establishing the Defense Department that barred anyone who had been on active duty in the previous ten years from becoming Secretary of Defense so that Marshall could take the position.

—Recipient of the 1953 Nobel Peace Prize for his work on the Marshall Plan.

Winston Churchill hailed Marshall as the “organizer of victory” in World War II. President Franklin Roosevelt counted on Marshall so much that he insisted he stay in Washington rather than take command of U.S. forces in Europe. President Harry Truman said that presidents aside, he was the greatest American of his lifetime and:

the greatest human being who was also a great man

Why do we need more leaders like him now?

Today our leaders—governors, mayors, Washington rhinos, military generals, and school board presidents— are full of excuses for why they can’t get the job done. It's happening on both sides of the aisle, and both reds and blues need to look at themselves in the mirror.

If you aren’t already convinced why we need leaders like George Marshall, here's some more fuel to the fire.

When a Brigadier General insisted that the army’s training manuals could not all be updated in three or four months and instead would require 18, Marshall asked him twice to reconsider his statement.

“It can’t be done,” The Brigadier General repeated

“I’m sorry, then you are relieved,” Marshall replied.

This encounter seems like Marshall was a cold-hearted human but the truth is he was a kind individual who cared deeply about people. Here is a quote from Merrill Pasco, a man who served as a staff secretary on the War Department General Staff in World War II. During this time, he had a daily and close association with General George Marshall.

On trips and on many other occasions, he would ask about families, but only during off-duty times. Whenever you were with him away from when he was performing his duties, he was
interested in your family and children and what they were doing. When he made tours, however, he would focus on military training and the adequacy of supplies.… He did not mix [personal interest in others]; he did that separately.

We need more of this now. In a time of long-winded debates, catchy campaign slogans, overspending, and broken promises, we need more accountable, and action-oriented leaders.

Go right straight down the road, to do what is best, and to do it frankly and without evasion. - George Marshall

“Person of the Year: A Photo History.” Time, Time Inc.